Call of the Sirens

First of all, if you have a minute, check out the galleries on Garret Izumi's Website. A rather a brilliant photographer, he did a wondeful series of black and white stills of air raid sirens in LA. I appreciate the sense of silence and static I get from his shots, which contrasts quite well with the blaring tone the sirens must once have produced. Good stuff, give it a look.

Other noteworthy snapshot worth a looksie are those of Olly Dack, from the UK. I've included, with his permission, a few pictures of his I think are particularily noteworthy (don't forget to click on them to see them in full size).

I really liked this one, not only because I'm a sucker for old stone, but because it provides an interesting sense of depth. Have you ever been in a cathedral and had a slight spell of vertigo when looking straight up? The slight fuzziness of the flag in the foreground, and receding darkness of the ceiling create a satisfactorily realistic sense of immersion, something I find frequenly lacking in amateur photography. 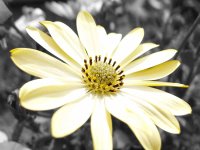 It's fair to say, I think, that close-ups are one of Olly's fortés. The tone of this picture draw the eye to the sharply defined centre of the flower, while the periphery of the petals (and, more understandably, the background) shift out of focus, replicating a certain sense of natural vision. 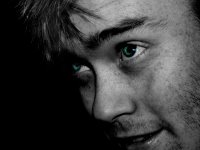 It wouldn't be a complete blog post without my friend Jez's hideous face. On a more serious note, I once more appreciate the focus brought by the colouration of the pupils, which give an impression of intentionality you don't always get from your average portrait. Although the natural focal point is the eyes, the actual object of the picture seems to lie outside the boundaries of the frame. The eye tends to follow the subjects gaze, giving the whole picture a sense of motion, of dynamism which is enhanced by the contrast in luminosity, and the forward-leaning of the head. A brilliant picture, although the man could use a shave (although who am I to talk of facial hair)...

I haven't included them here since I wanted to focus mostly on the black and white shots, but do checkout his wildlife series, which display a certain knack for capturing things in motion well. Some very impressive and promising work there...

NB: Pictures in this post are © Olly Dack.
Posted by Edward at 8:59 am